Since a few months I publish a newsletter for my family and friends. One of the objectives of this newsletter is to share my entrepreneurial journey. It contains the latest news about To-Do Studio, the startup I founded with Erik Renaud. Our company designs and markets a software service that allows leaders to empower others to take initiative. The newsletter is intended to offer a privileged look at the path of a startup company.

Encouraged by the positive comments I receive, I decided to give access to the newsletter to readers of this blog. That’s why I invite you to subscribe to my newsletter.

Here is the link to subscribe: Destination To-Do Studio

The newsletter is free. It is published every 2 months, 6 times a year. The subscription does not require any obligation on your part. The only information you must provide to register is your email address (it will never be shared with third parties). You can unsubscribe at any time. If you wish to preview the content of the newsletter, I invite you to read the first issue here.

PS. Following registration, if you do not receive quickly a confirmation email, check your Junk Email inbox.

The Hello World Road Trip featuring Shawn Wildermuth will be in Montreal on June 6th at noon at the Microsoft office’s. For the occasion, I will be the guest for the “Hello World” podcast. During the live recording you will learn my story of how I got started writing software.

Following the recording, Shawn will be giving a talk: BUILDING APPS WITH ASP.NET CORE 1.0!

This event is FREE.  However, you must register on the website http://www.hwroadtrip.com/ for the event.

For those of you living in the Montreal area, Monday night (May 11th), I will make a presentation at the MsDevMtl Community.  This event takes place at the Montreal Microsoft Office (2000 McGill College, 5th floor). I am speaking at 18h30.

I will do a talk with Erik Renaud about //build/ conference. Both, we attend the conference in San Francisco. During this presentation, we will discuss the announcements made by Microsoft. Please note that this talk will be in French.

For those of you living in the Montreal area, Monday night (April 27th), I will make a presentation at the MsDevMtl Community.  This event is free and takes place at the Montreal Microsoft Office (2000 McGill College, 5th floor). I am speaking at 18h30.

I will do a talk about “Open Source, the Cloud and the New Microsoft”. During this presentation, we will try to explain the strategic reasons for the 180 degrees shift by Microsoft during the past year. Please note that this talk will be in French.

Slingboards Lab is not my sole active project. For those of you who speak French, you may know me as the host of the Visual Studio Talk Show, a podcast about software architecture. Each episode is an interview with a software development expert. This month, I am not only publishing episode #177 but I also celebrate the tenth anniversary of this podcast.

On November 22nd, 2004, I published the first episode of the Visual Studio Talk Show. Being online for 10 years now, it is probably the oldest French podcast discussing technology. At the time the word podcast was not even part of the standard vocabulary. To explain what a podcast was, I presented it as a radio show on the Internet. 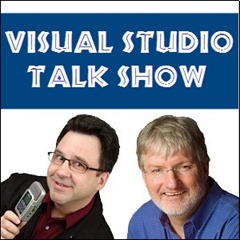 The guest for this first episode was Eric Coté . We discussed .NET certification and multilingual website programming. When I launched the podcast, I did not have a co-host so when I recorded the second episode, Eric became co-host. The experience lasted two years before he decided to leave the show. He was then replaced by Guy Barrette which is still the current co-host.

Already ten years. Time goes by too quickly. Anyway, this is worth celebrating.

I would like to take this opportunity to thank all our listeners across the globe. Through your emails, all over these years, we discovered that we had listeners on every continent. What a nice surprise this was, not to mention your kindness. Thank you!

Happy ten years. Let’s hope that we will still be online for the 20th anniversary.

This summer, I have been invited with Guy Barrette as a guest to Pimp The Cloud podcast. After a brief review of the birth in 2004 of the Visual Studio Talk Show podcast, we discussed the future of Microsoft (Podcast is in French).

For those of you living in the Ottawa area, Thursday night (April 10th), I will make a presentation at the Ottawa IT Community.  This event is free and takes place at the Ottawa Microsoft Office. I am speaking at 17h45.

This presentation teach how to design a real-world yet beautiful RESTful API. It draws from the experience Mario Cardinal have gained being involved in the design of the RESTful API for a task board. This presentation begins with a brief overview of what is a REST and continue with the design process. We conclude with a review of the best practices when designing RESTful API. Armed with skills acquired, you can expect to see significant improvements in your ability to design a pragmatic RESTful API.