In recent days, I received an email from Francois Beauregard thanking me for my book and, especially, for the dedication I wrote in his copy of the book. Basically, I wrote to Francois that my book would never have happened if he had not encouraged me to explore the field of executable specifications.

The little I have done in writing the book is built on the shoulders of giants such as Francois. Francois is a pioneer who has done much to popularize the field of executable specifications. In 2006, when you search for “executable specifications” on Google, the first results were heading to GreenPepper, a software development tool  that was a direct competitor to Fitnesse.

GreenPepper was built by Pyxis, the company that Francois is the founder. Already in those years, Francois was describing GreenPepper as a tool for writing executable specifications:

I can only thank Francois for introducing me to the GreenPepper tool and later for allowing me to work with the team behind the product.

Unfortunately, today GreenPepper no longer exists. Only memories remain. But it is not so important as the field of “executable specifications” is still alive, more than ever.

Here is an important milestone in terms of my book. I received today in the mail the printed version of the book.

I think this is very visible that I am very proud of the final result.

You can buy the book here:

After several years of work, I come now to the finish of my book. The ebook version of, Executable Specifications with Scrum: A Practical Guide to Agile Requirements Discovery, is now available online at:

I received a funny email this week from Amazon. As it happens on occasion, they offered me a book that they think I should enjoyed. I have to admit they know me well because they offered me to buy my book. 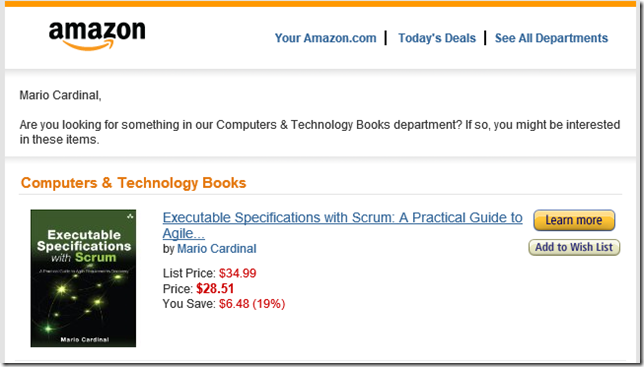 This email made my day.

My book Executable Specifications with Scrum will be officially release by the end of July. These days with my publisher Addison Wesley, we are finalizing the last copyediting tasks.

For those who can not wait for the final version, in the meantime, if you are a subscriber of Safari Books Online Service, a “rough cuts” version of my book is available here. Happy reading.